*This post was written on Sunday, but thanks to slow/no internet on base, we couldn't post until now.

Today is our 3 week anniversary! We have been in Spain for 7 days and we are loving it. The last week has been spent getting settled in, but we have had plenty of time for enjoying the beach, our new neighborhood, and the food...and the beverages. But let's begin at the beginning, as they say. How do you get 2 people, 8 bags, and 1 dog from Norfolk, Virginia to El Puerto de Santa Maria, Spain? 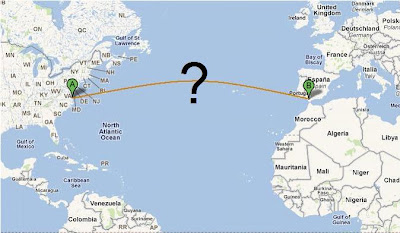 First, you start off by packing up your Jeep Patriot with the above-mentioned people/bags/dog combo and driving to Maryland, because your oh-so kind friends Kristen and Chris have agreed to take you to the airport...in Philadelphia. It is important to thank (bribe) your generous friends by taking them out to dinner. It's even better when dinner includes grapefruit crushes (if you don't know what a grapefruit crush is, find out now) and a view of the Chester River. Just a suggestion. So, that was our Thursday.

On Friday, we had lunch with Meghann's mom and sister, then went back to Kristen and Chris's for one last night of fun on the Eastern Shore. Saturday morning we repacked all of our bags, and weighed them multiple times - barely under 50 pounds each, phew. Then we piled into the Jeep again with Kristen, Chris, and Tom and hit the road. We had one last important stop to make, our final meal in the United States, so of course we chose something authentically, quintessentially American, that shining beacon of culture and cuisine: 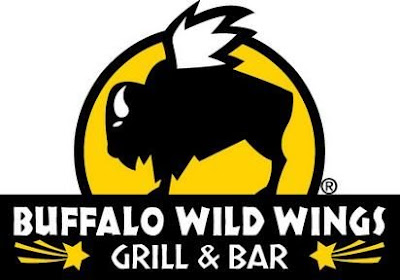 Ahh, Buffalo Wild Wings, where we enjoyed wings, fries covered in cheese, and a beer, all while surrounded by flat screen TVs and sports memorabilia - just like the Founding Fathers envisioned. Isn't America wonderful? 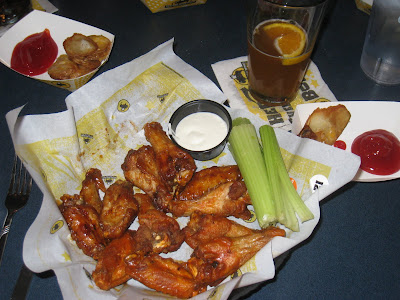 Adios, chicken wings! Unfortunately, it was almost time to say adios to our awesome amigos, but not before one last group picture. Thanks again Chris, Kristen, and Tom! 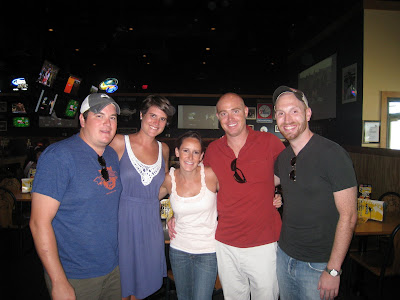 Chloe was still excited about being in the Jeep, little did she know... 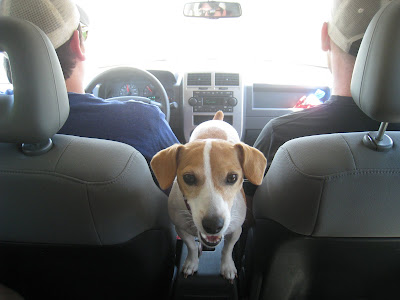 Before we knew it, we were at the Philly airport and had said our goodbyes. And before she knew it, Chloe was in her travel bag. Can you spot the dog in this ridiculous bag picture? Oh, and remember all the careful weighing we had done earlier in the day? Well, we were 2 over. 2 whole bags, that is. Oops. Instead of charging us $140 in fees, the ticket agent let us go with a quick "we're military/newlyweds/moving to Spain" sob story. Gracias, Lufthansa! 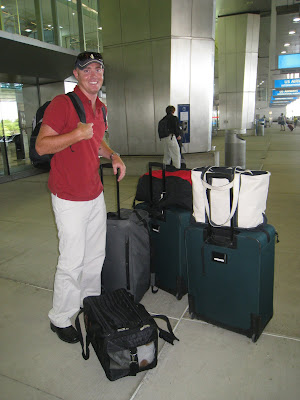 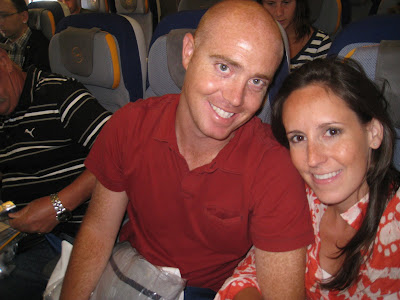 and Chloe in hers. It looks like we got the better deal. 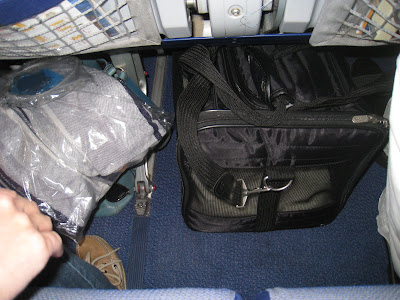 Oh, yeah. We definitely got the better deal. Cheers and salud! And hooray for beverage carts on international flights! 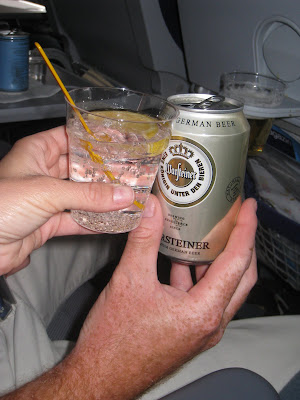 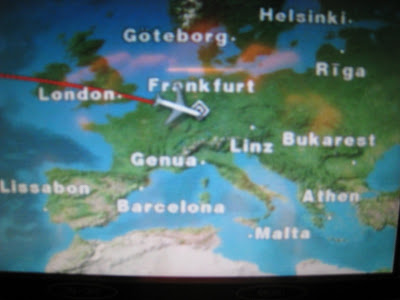 Here's what we saw of Frankfurt, lovely this time of year, si? 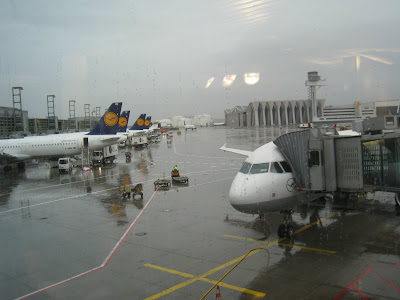 After a short flight south, we were greeted with sunny skies over Madrid. 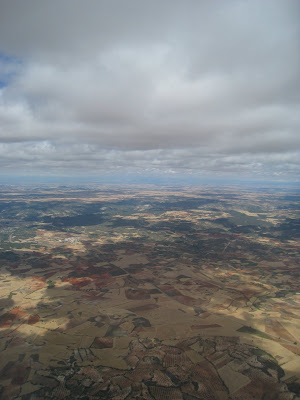 We collected our baggage, waltzed through customs (ok, so we don't know how to waltz, so it was even easier than that) and found our rental car. We were happy to see that our bags all fit in our Euro-auto. No worries, we ended up with a sweet Skoda wagon. (Meghann was hoping for one of the Minis, on either side.) 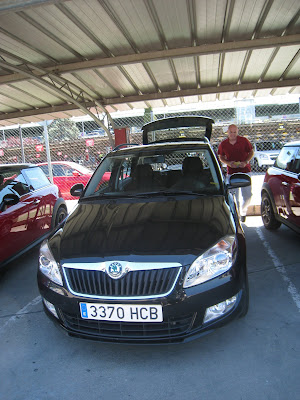 During the 6 hour trip, Graham drove and Chloe did a lot of yawning and sleeping. Hey, it's tiring to be glorified carry-on luggage for 15 hours. 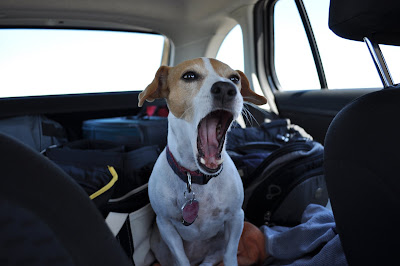 Meghann did a lot of this. 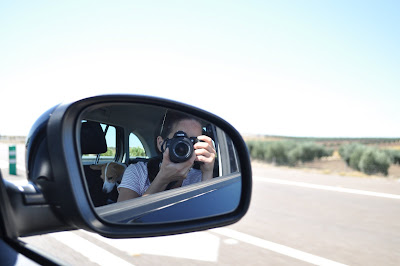 There was plenty to take pictures of between Madrid and Jerez de la Frontera, where we dropped off the rental. Here is a picture of one of the many sunflower (girasol) fields. More pictures from our drive to come in another post. 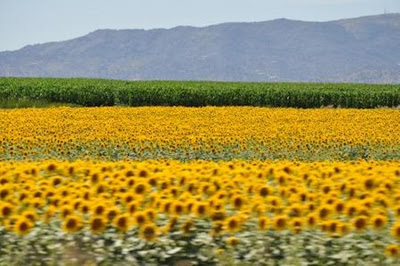 In Jerez, we were picked up by one of Graham's coworkers and dropped off at our new casa in El Puerto de Santa Maria. Despite the 23 hour trip from Philly to Puerto, we had to go see the playa. Finally - we are aqui. 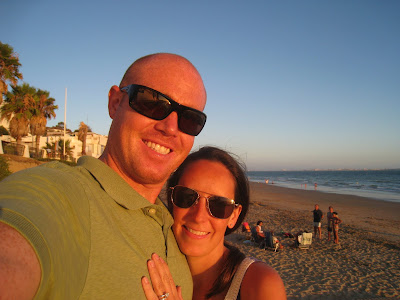 Touching the other side of the Atlantic. Crazy to think we were across the pond just a day before. 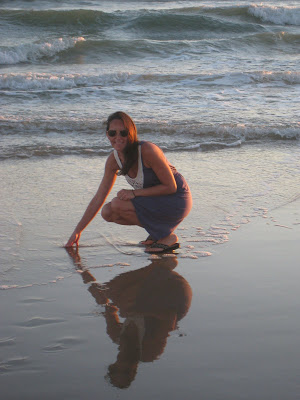 One last shot of the beach...and then we were off to have tapas and cervezas, jet lag be damned! 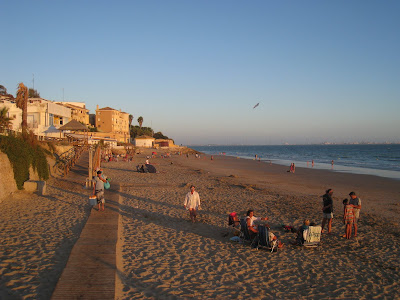 What is your longest travel story? When you reached your destination, did you call it a day or could you not resist getting out to experience the local culture?
Posted by Meghann G at 12:04 PM