We hosted Friendsgiving at our casa on Friday night. A bit early, but we knew many of our amigos would be traveling during the holiday and for some of us, this would be the only opportunity to stuff our faces full of turkey and all the sides for a traditional meal.

No fancy tablescape (Does anyone else think that is one of the weirdest words? Makes your table sound like the surface of the moon.) just some apples, candles, and the lace runner from our trip to Bruges last winter, over a textured tan tablecloth. Textured = it wasn't ironed. Also, no elaborate place settings, because dinner was buffet style. Settle down over there, Martha. 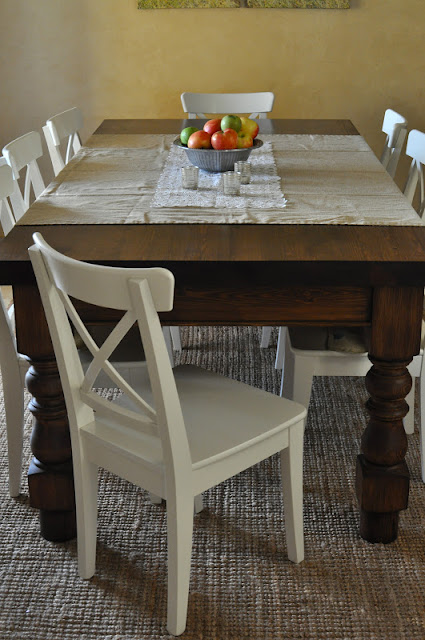 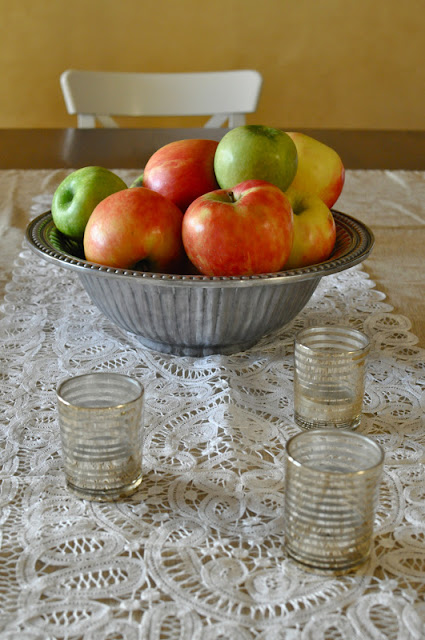 Kept the mantle simple with some votives, dried corn, and a glass pumpkin that I found on sale a million years ago that is now my go-to decoration from October to December. 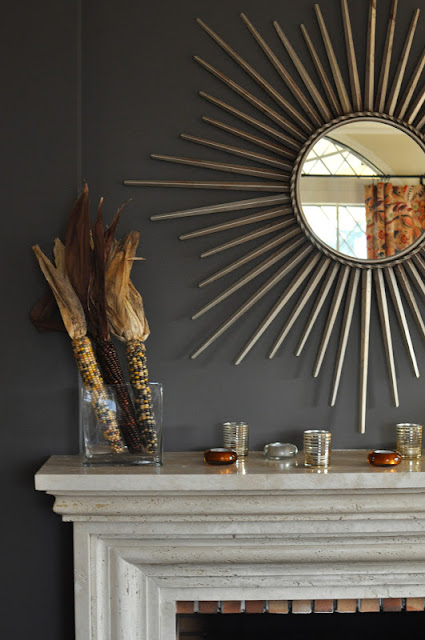 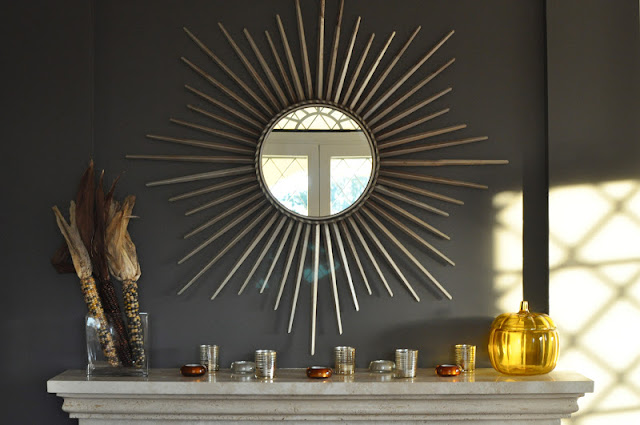 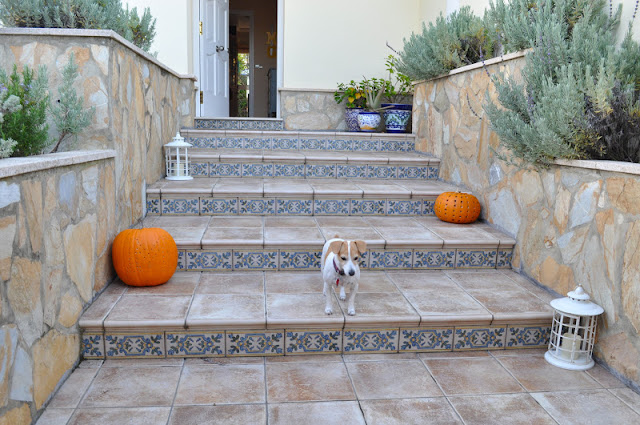 We picked up some real pumpkins at the commissary (grocery store on base) a while ago, but never carved them since Halloween got lost somewhere between our time in DC, my sister's wedding, and getting stranded by Superstorm Sandy. So, we turned them into non-Halloween themed pumpkin luminaries instead. 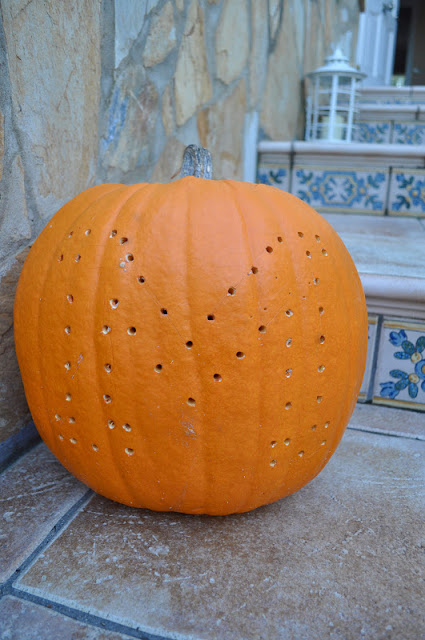 To me, Thanksgiving is a Fall celebration and is about being thankful for bounty - from the fields and in our lives. So, no tree trimming here and certainly no Christmas decorations yet. Thanksgiving is special in its own way - there's no gift giving, just giving thanks for food, friendship, and family. And no matter where you are (I've celebrated in Italy, England, and Spain) it's an American holiday.

And nothing says America like deep-frying a 12-pound turkey fresh from the Spanish butcher shop. 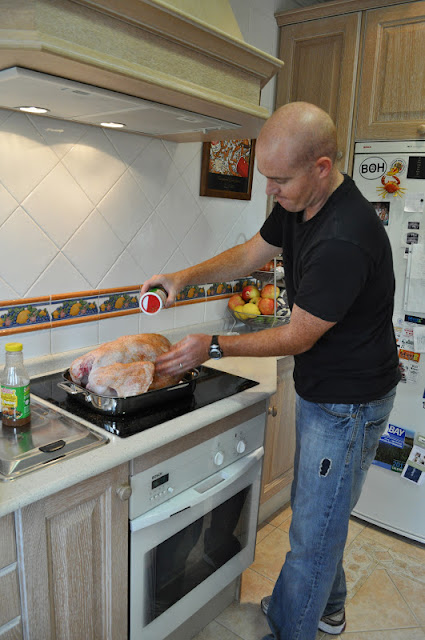 Graham was in charge of the turkey from start to finish and it was so good. I think you can really tell the difference between a fresh turkey and a frozen. And deep-drying is the way to go - it only took 45 minutes, plus I had the oven free for making sides! 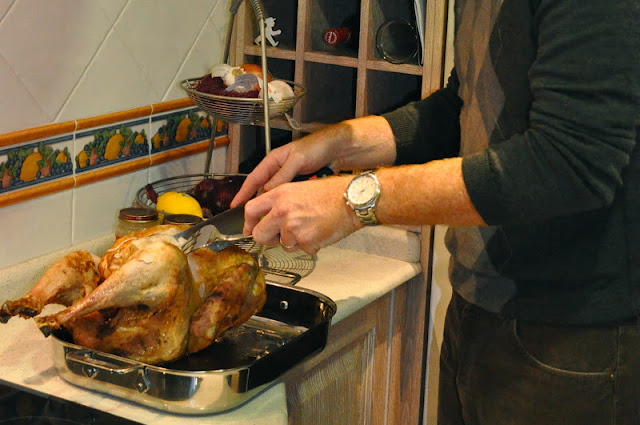 My contributions were macaroni and cheese (an Eastern Shore of Maryland thing) and a sweet potato casserole that is Graham's mom's specialty. The rest was brought by our guests. This was just the dinner buffet, there was another table full of desserts! 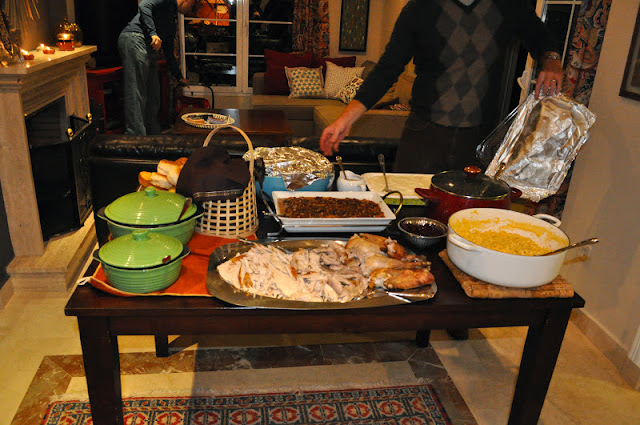 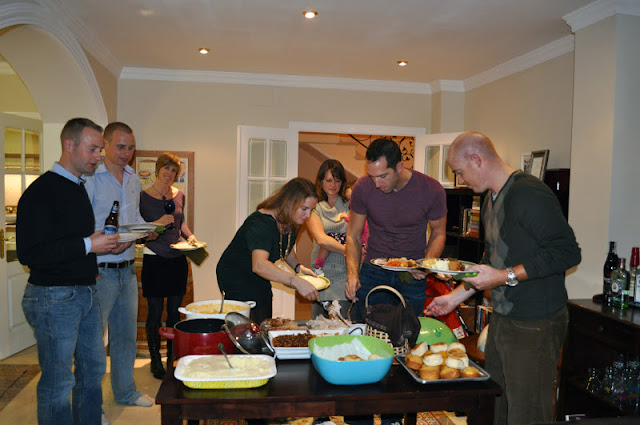 We had such a great time! Which meant we didn't remember to take a (not-so-great) family picture until the end of the night. 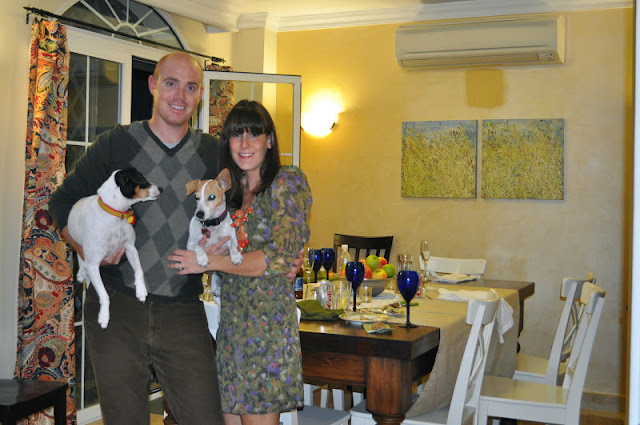 More signs of a good time. And a reminder that our dishwasher broke on Friday morning, with absolutely no hope of having a repairman come out on the weekend. That's what we like to call getting "Spained". 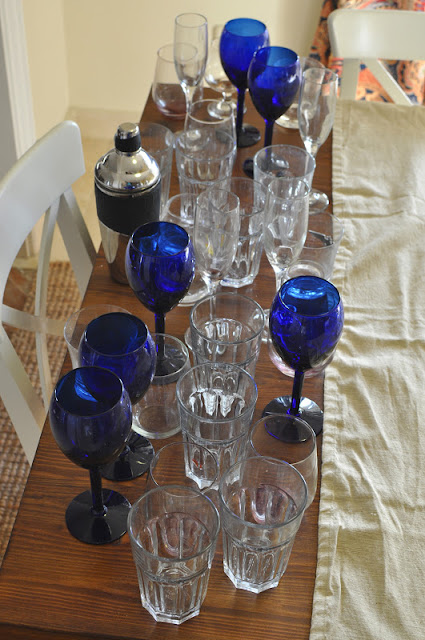 Here's the recipe for the sweet potato casserole I made. It's inspired by the one that my mother-in-law, April, makes each year, with a few slight changes. I was never a fan of sweet potato casserole until I had hers - it's rich and sweet (but no funky marshmallow topping) and is the perfect balance to all the savory and salty foods on your Thanksgiving plate. 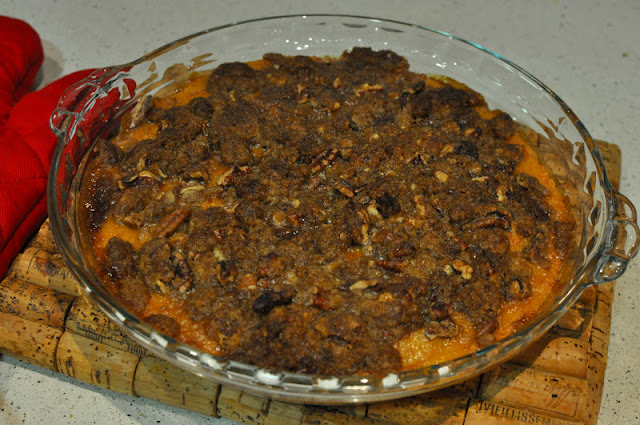 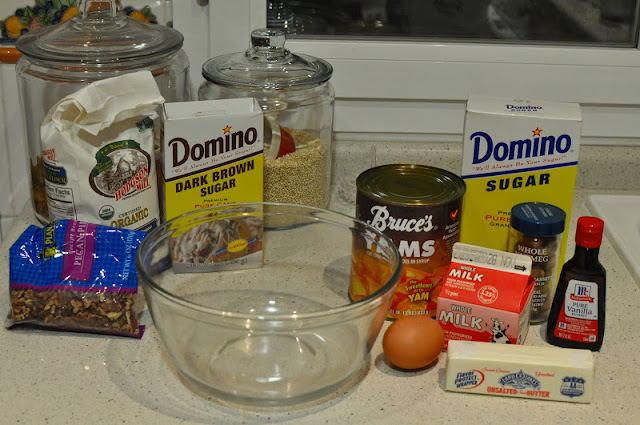 Directions:
-Preheat oven to 350 degrees
-Melt butter in a pan over low heat (4 Tablespoons total)
-Mix ingredient for potatoes, mashing until smooth
-Place in shallow baking dish
-Mix ingredients for topping
-Spread topping over potato mixture
-Bake for 30 minutes or until bubbling and topping is browned

This amount fills a pie dish and is good for 2 people (with leftovers!) or 4 without. 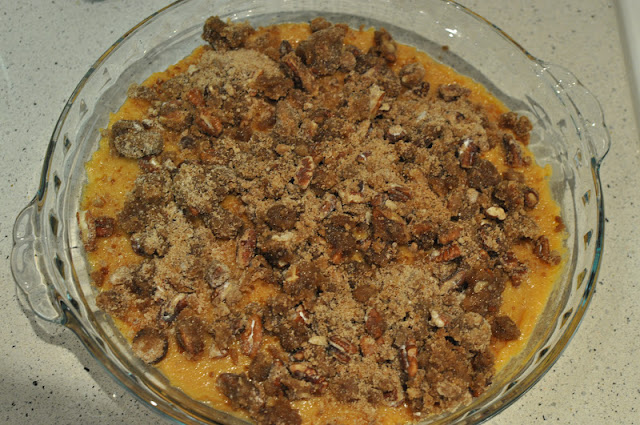 And coming out of the oven, with the topping browned and caramelized and delicious. 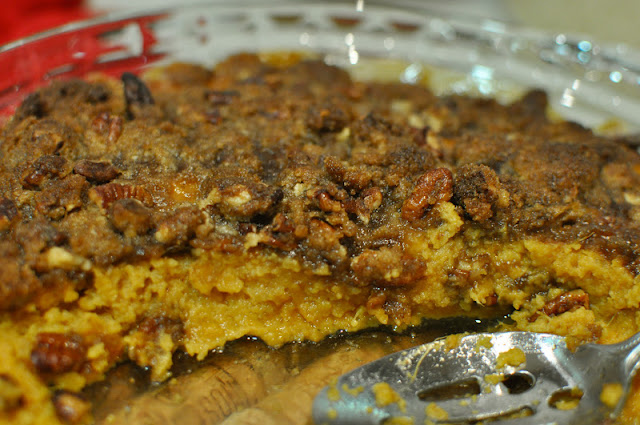 Here it is on the plate with some green beans, mashed potatoes, and mushroom gravy. We decided to have "leftovers dinner" last night, which was a mix of actual leftovers and some freshly made Thanksgiving favorites that we just wanted to eat more of. Sweet potato casserole definitely had to be whipped up again (and it's so easy to do) because Graham loves it. 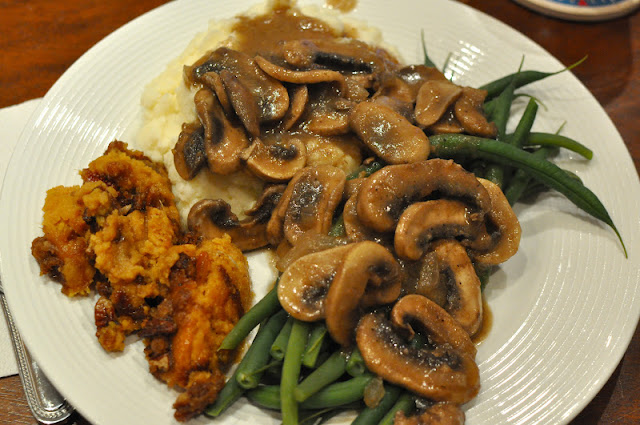 Have a Happy Thanksgiving (Feliz Día de Accíon de Gracias just doesn't roll off the tongue the same way) and no matter where you are, may it be filled with much happiness and many leftovers!