is what our trip to the States was filled with. We took separate space-A flights over (flights that military members and their dependents can get on for free, if there is extra space) and both ended up on cargo planes. This meant there were jump seats instead of regular airliner seats, ear plugs were necessary due to the noise, we had to wear layers since it was not climate controlled like a commercial plane, and we spent most of the 9 hour flight sleeping on the floor in a sleeping bag. On the positive side, it was free, we had plenty of leg room, and it got us where we wanted to go (well, we flew into New Jersey, but close enough) which was to Maryland to meet this little lady:
Meghann went home 10 days before Graham, so that she could spend some quality time with her sister and niece. She also took tons some pictures of Abbi, who at this time was just 2 1/2 weeks old.
We also made a couple of trips down to North Carolina to visit Graham's familia. The second time was during his parents' 31st wedding anniversary. It was nice to say "congrats" in person.
There was also plenty of time for catching up with friends and doing the sorts of things that we had been missing since we moved to Spain. We hadn't been home for 7 months, so the list was long.

Brunch! Is there anything better on the weekend than recounting the previous night over eggs benedict and a bloody mary? Unfortunately, the concept of breakfast-lunch doesn't seem to exist in España.
Snow! Only a few inches, which quickly melted, but infinitely more than we have seen in sunny Andalucia.

A long overdue meeting of the Ginger Snap Dragons! Which is Graham and our friend Tom's balding red-headed gang.
Celebrating with amigos! We spent Valentine's Day dinner with Kristen and Chris, who are the same friends that drove us to Philly when we left. Some people might think it's weird to spend Valentine's Day with another couple, but what's better than spending the day with 3 other awesome people, instead of just uno? And all 4 of us kind of hate going out on Valentine's Day, so we had an awesome meal at their casa.
The Turnpikes! Our friends' band rocks and we got to see them practice. We weren't around for a show, but they are playing in Chestertown tomorrow night, so if you're anywhere on that side of the ocean, you should go.

College amigas! Meghann was able to spend an afternoon at Boordy Vineyards tasting wine and catching up with some of her sorority sisters.
Pancake Tuesday or Shrove Tuesday or Mardi Gras or whatever you call it! We're not really religious, so it was just a good excuse for brinner (breakfast-dinner, brunch's cousin).
Ordering from companies that don't ship FPO/APO! We both needed new glasses and were less than impressed with the selection on base. Meghann had heard of a company called Warby Parker, which lets you go online, pick out 5 trial pairs of glasses, and they will send them right to your doorstep (unless your doorstep is overseas) for free. We are normally annoyed by companies that don't ship to military addresses, but WP donates a pair of glasses to a person in need for every pair that you buy and each pair is only $99 with prescription lenses. On top of all that, you get to keep the trial pairs for 5 days, so you can pass them out to your friends and have a glasses fiesta. 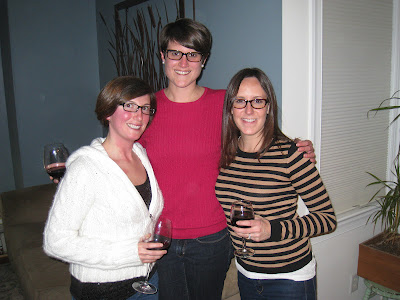 Seeing familiar faces and places! We love España and it is beautiful, but there's just something about being back in your home country. For us, visiting the Shore and the Outer Banks was refreshing. Speaking our native language was nice, too. Which is English (we know you might have been fooled by our excelente Spanglish skills).
Being back in the States and spending tiempo with friends and family was great. We didn't get to see everyone though and we missed the people we couldn't catch up with, especially our West Coast amigos. It's a bummer to be 6 time zones closer, but still 3 time zones away.

It was also tough to leave, especially now that we have a pequeña niece. Between the time when Meghann first got there and when we left, Abbi had already grown so much. We can only imagine how much more growing and changing we will miss while we are overseas. Not to mention everything else going on in our families' and friends' lives. Luckily, the space-A process made it a little easier on us, by delaying our intended departure date by a week. This meant saying "adios" to people and then showing back up, because we couldn't get a flight.
After 7 days of driving up and down the East Coast, trying to get on flights in Dover and Norfolk, we were able to get on a cargo plane in New Jersey. On our way back to Rota...finally.