A few tips on blending in

I'm American, proudly so, cue the patriotic music. I can buy as many clothes as possible from Zara (believe me, I try), eat and drink like a local, even use some choice phrases in Spanish, but chances are I'll be recognized as an American when I'm out. And most of the time, I'm perfectly fine with that.

There are times though that I want to blend in a little more, especially if I'm in a crowded place or by myself, or both. Honestly, I've never had an issue while living here, never felt unsafe, and have only once been hassled for being an American (in Granada, and admittedly the woman was belligerently drunk). I guess part of my desire to blend in is that I don't like sticking out like a sore thumb. Safe or not, it can just be awkward.

Some things can't be helped. Graham's ginger status means that pretty much the only places he could be mistaken for a local are Ireland or Great Britain. I'm a little better off, with dark hair and eyes, which are very common in Andalucia, and being short (for an American, happily average here). Of course, those things only get me so far, the jig is up the moment I start talking. 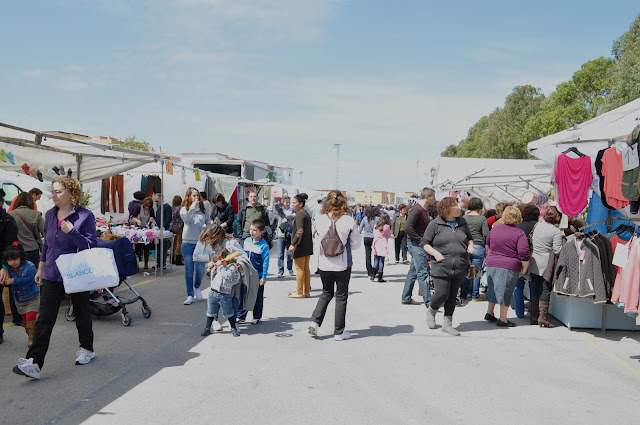 Besides the obvious (ditching the American flag t-shirt or any t-shirt, really) there a few things that help when trying to blend in, like earlier today when I went to the Rota market to walk around. In the crowd, surrounded by cries of ¡todo a 7 euro! and ¡ole ole ole que barato vendo!, here are a few things to remember:


-Dress as if it's 20 degrees cooler. The thermometer in the Mini read 66 degrees when I parked the car this morning. Where I'm from in the States, 66 degrees in March is an invitation to break out those packed away summer clothes - woohoo flip-flops and shorts! Here in El Puerto, that's considered chilly. Stick with pants, long sleeves, closed-toe shoes. Boots, scarves, and jackets are also still perfectly acceptable. Wait until at least May to ditch most of your clothes, near nakedness is absolutely fine, as long as it is summer. 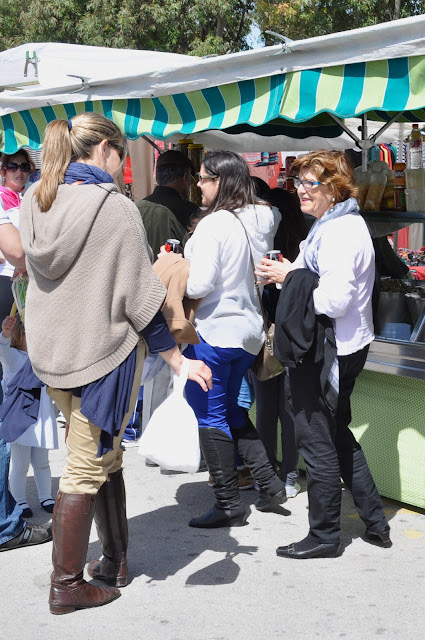 -Put the giant camera away. I love taking photos, just ask Graham, I am constantly stopping and snapping. But in a crowded situation nothing says "hola, I'm a tourist" like that telltale Nikon strap. It seems like DSLRs are now so common in the States and of course, in big tourist cities worldwide, but in most small towns here, you rarely see them. And reaching in and out of a bag for a camera or having your vision focused through a viewfinder means you are obviously distracted. So, in situations when I don't have someone else to watch my back (or my purse) I keep activities separate. First, I do my shopping, then I do another lap and take pictures, or vice versa. That means I only have to be focused on one thing at a time - my wallet or my camera. Also, if I'm not juggling, I'm much less likely to misplace a lens cap or a handful of euro coins. 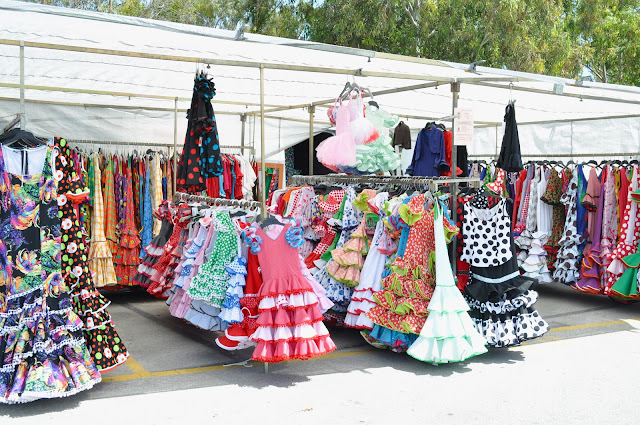 Couldn't resist taking a lap back through to take some pics of stalls selling dresses, accessories, and fabric for feria. 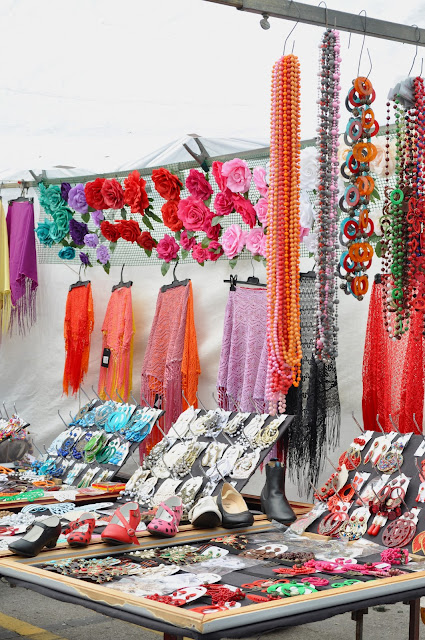 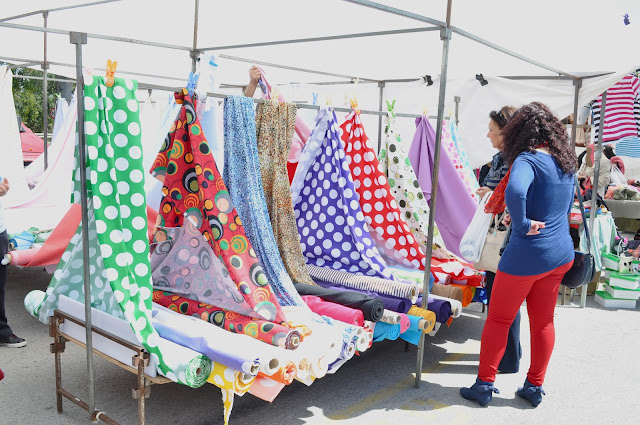 -There's no rush. Spanish people do not hurry when they are walking. There is none of that aggressive bobbing and weaving that Americans love. It's not a race, ditch the power-walking. Learn how to stroll, to amble, to go with the flow. Remember that a walk is not just getting from one place to another in España, it's an event in itself, it is el paseo. And don't hesitate to stop in the middle of a walkway or sidewalk, to say hello to a friend, check your phone, or for no apparent reason at all. 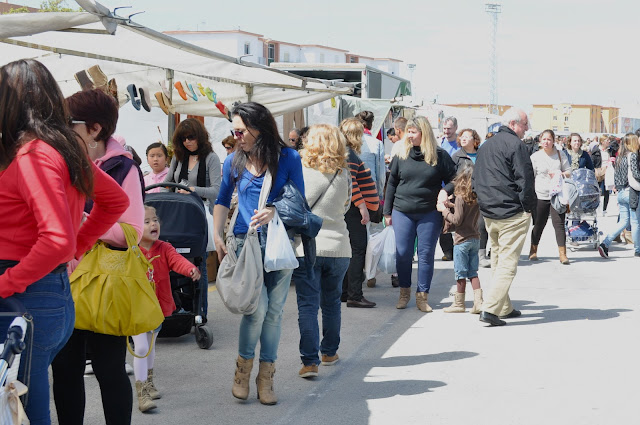 -Break your big bills. And by big, I mean anything over a 10 euro note. Unlike in the States, where counting out exact change will drive people crazy, most merchants here would rather you pay with a fistful of coins than a 20. I joke that ATMs should dispense coins, like a slot machine, instead of bills which no one seems to want. This is especially important at markets where almost all transactions are in cash, but is good to keep in mind when heading out for a coffee or to grab something from the frutería. Also, nothing kills a haggling session like whipping out a crisp stack of cash. 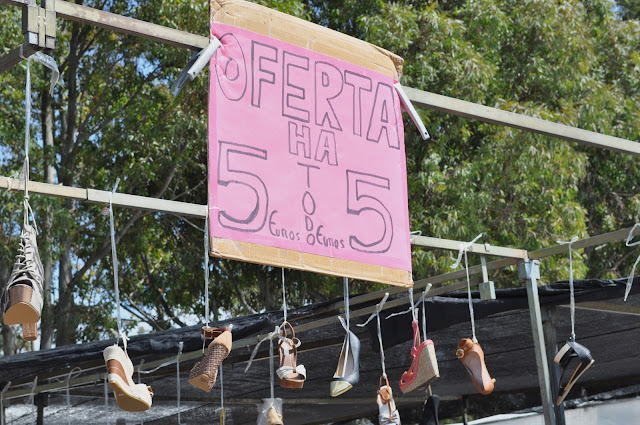 Here's what I picked up today, all bought with pocket change: 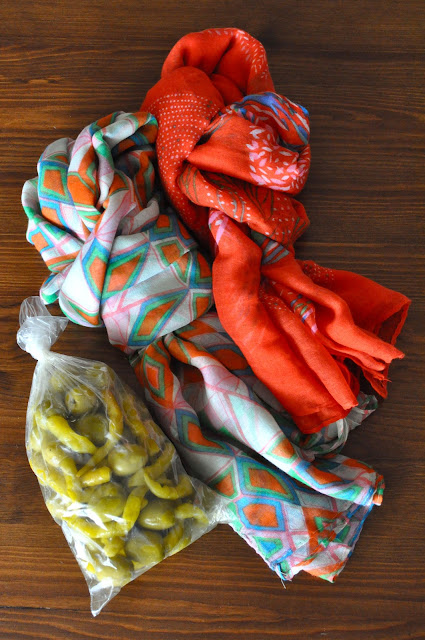 2 scarves and a bag of pepper-stuffed olives.

-Bring a child. Children go everywhere here and nothing says "I'm a local" like a fancy European stroller. 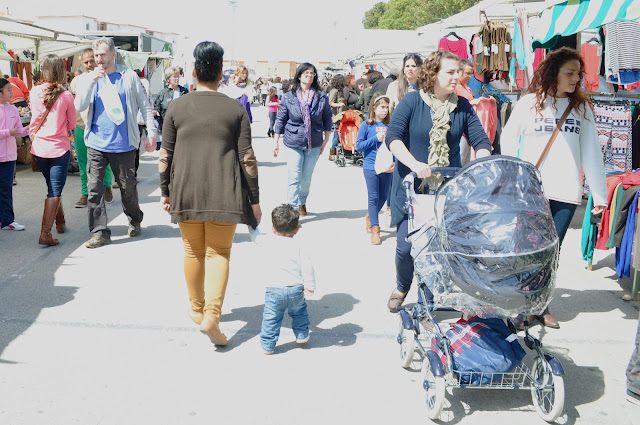 Buy some ridiculously preppy baby clothes while you're at it. 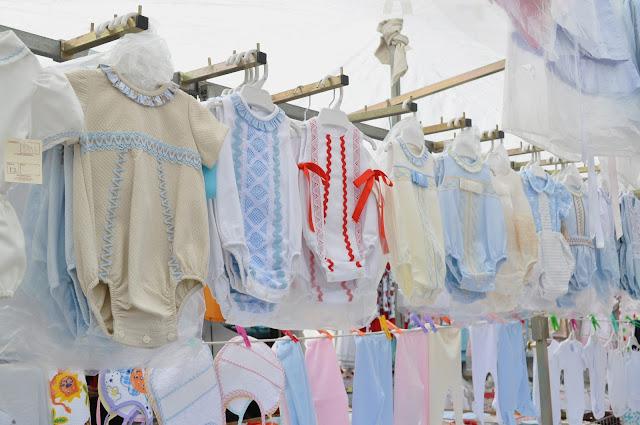 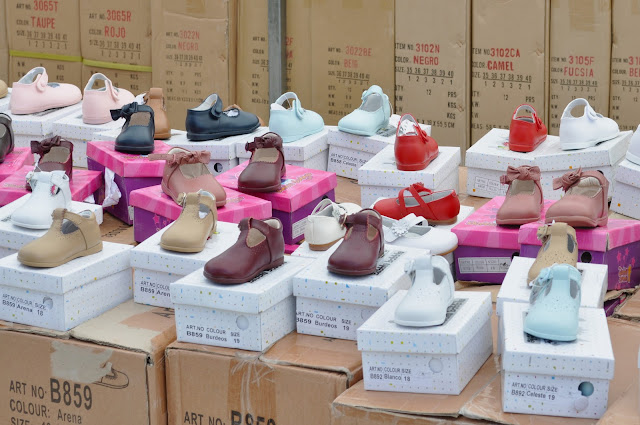 -Bump into people, literally. Personal space is not a concept here. Nudging, bumping, reaching over, crowding, they are all acceptable.

-Take a beverage break. If you're feeling overwhelmed, tired, thirsty, or just because you feel like it - it's time for a coffee or a beer. Just do not order it to-go. Sit down at any one of a million cafes or bars (outside, if weather permits) and enjoy.

Any other tips on blending in? Or do you rock your American flag (or Union Jack, or whatever) t-shirt with no shame?