*In keeping with our New Year's resolutions (we went to the gym 3 days in a row!), we are trying to blog more often.  We left a lot of 2011 out, and want to catch up before moving on with the nuevo year.

Do you remember our roadtrip to Ronda?  Well, after we left Ronda, we drove a little farther to Juzcar, normally a traditional pueblo blanco.  But this summer it was painted blue.  Why blue?  Sony paid to have the town painted with over 1000 gallons of blue paint for the movie premiere of "Los Pitufos".  Who are the Pitufos?  They're these guys:

We got the feeling that Juzcar doesn't normally get much traffic, judging from the narrow road that was full of blind turns, pedestrians, and other cars.  Despite all of that, Graham still enjoyed the drive. 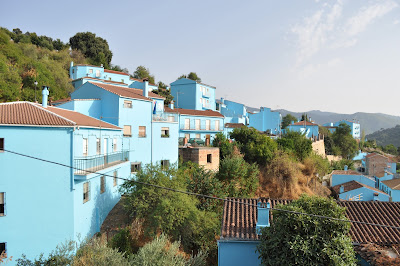 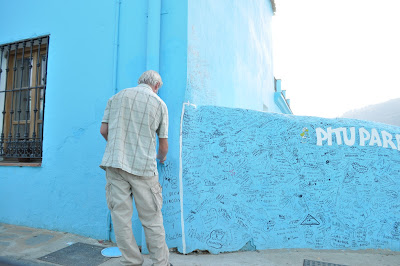 Although this was supposed to be a temporary publicity stunt, in December the majority of the town's 221 residents voted to keep their town blue.  The new hue has increased their annual tourist visits from 300 to over 80,000.
Posted by Meghann G at 11:00 AM