Over the MLK Day long weekend, we headed norte to Bruges, Belgium.  It only took a car, plane, and train to get there.

After checking into our hotel and getting the great news about the arrival of our niece, Abbi, we headed out to get dinner and some celebratory beers.  On our way to the pub, we passed through the main square.  Even though Christmas was weeks before, some of the buildings still had lights and decorations up.  We could see why the city is such a popular holiday destination, even without it's Christmas market. 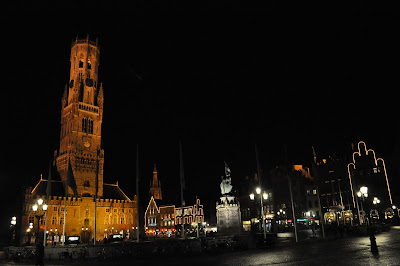 Sometimes when we travel, we will wander around until we find a pub or cafe that looks good, but we had already decided on Cambrinus, a bar offering over 400 different beers.  After looking through the giant beer bible menu, Graham decided on a framboise and Meghann took the server's suggestion and had a Delirium Nocturnum.  Having several hundred choices is definitely a change from Spain, where a bar typically has uno type of beer and you order by simply saying "una cerveza, por favor." 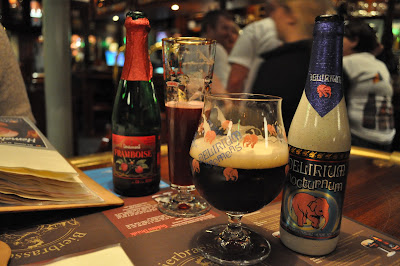 Everything that you've heard about Belgian beer being delicious is true.  Although Spain has great wine, we always miss good beer. 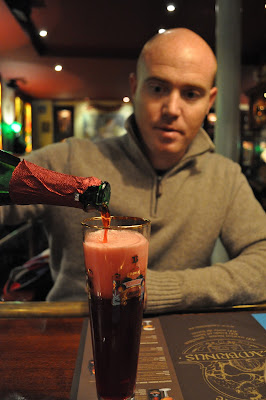 The next morning, we headed out to immerse ourselves in culture - seeing that we had immersed ourselves in beer the previous night.  Our first stop was the Groeninge Museum, dedicated to the works of many Flemish artists. 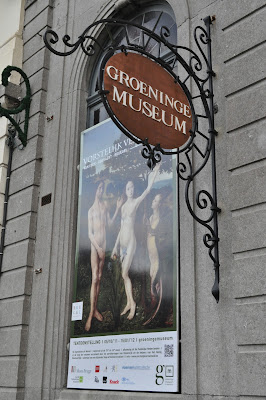 After crossing one of the city's many bridges and a short walk, we visited the Basilica of the Holy Blood.  It is a 12th-century church which earned it's basilica title because of its beauty. 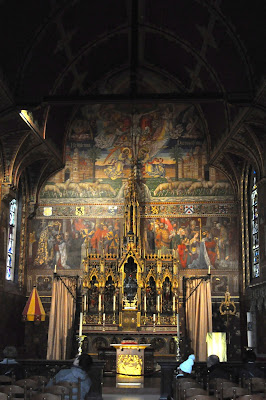 And the "Holy Blood" part of the name comes from a relic that the church claims contains the blood of Christ.  We happened to visit while it was on display, and visitors could approach and touch the relic.

For dinner, it was more traditional Belgian food.  Meghann enjoyed a very large pot of mussels and Graham had a wonderful steak, both with sides of fries and beer. 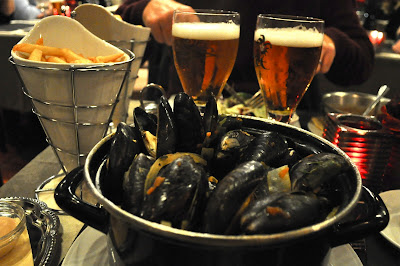 For dessert we decided on another beer bar, 't Bruges Beertje, which offers over 300 choices.  In typical Belgian fashion, that means the bar was stocked with dozens of different types of glasses, each for a specific type of beer. 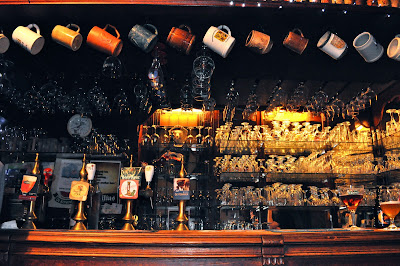 Our plan was only to stay out for one or two drinks, but we were drawn into staying much longer.  Are you surprised?  Every beer we tried was great, the atmosphere was comfortable and cozy, 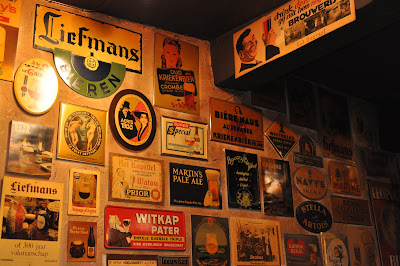 and Graham made a friend.  A British ex-pat joined us for much of our evening, and was happy to suggest a few of his favorites. 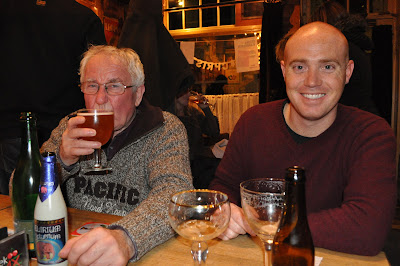 For the second night in a row, we stopped for french fries topped with one of twenty different choices of sauce.  Apparently the Belgians are all about variety. Sorry for the lack of pictures, it turns out to be difficult to juggle a camera and a boat of fries after (more than) a few beers.

What do you do after a long night of drinking?  Go on a brewery tour!  So we picked up our tickets, and while waiting for the tour to start, we took a stroll around beautiful Minnewater park. 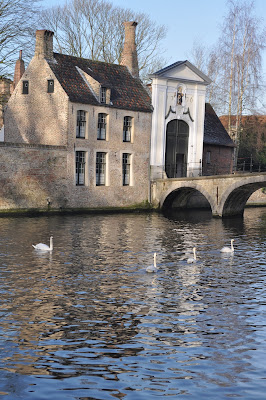 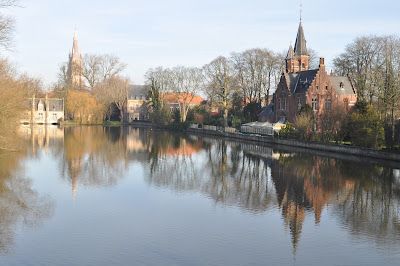 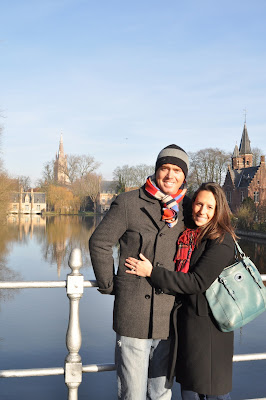 At the stroke of noon, we were eagerly lined up waiting for our tour to begin at Halve Maan (Half Moon) Brewery. 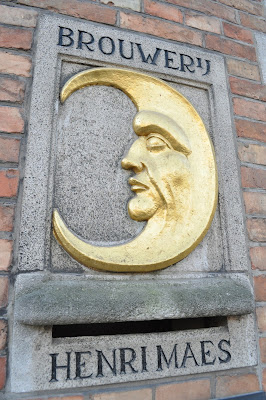 There used to be over 150 breweries located in Bruges.  Halve Maan, a family owned brewery which opened in 1856, is the only one that remains within the city limits.

At the end of the tour, it was back to the tasting room to enjoy our free glass of beer. 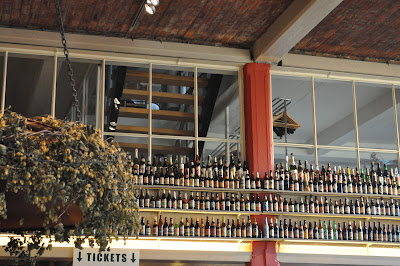 Our table next to the fire was so inviting that we decided to stay for lunch...and maybe another beer. 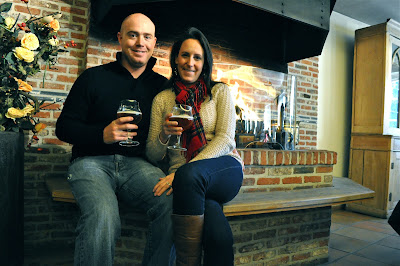 Since it's so close to the brewery, the Church of Our Lady was our next stop. 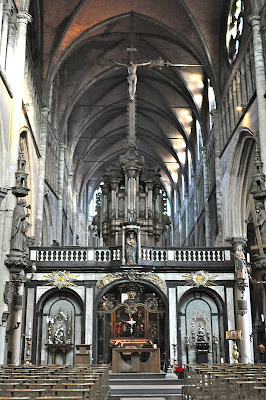 While it appears to be a typical Gothic church, Our Lady has several unique features:


On the way back to the hotel, we stopped at one of the million (approximately) candy stores.  Belgium is known for its chocolate, but Graham was told to keep an eye out for cone-shaped jelly candies.  Good advice - these are delicious. 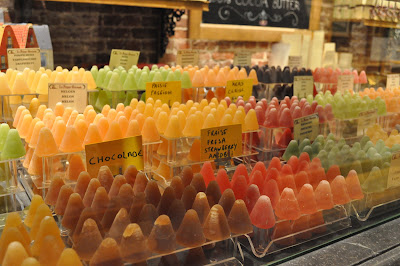 When we travel, we love to try local specialties.  But since we live in a pequeño Spanish town, we also like to take the opportunity to eat foods we can't get often. So, we decided on a Greek restaurant that we had passed several times and is highly rated on Tripadvisor called The Olive Tree. 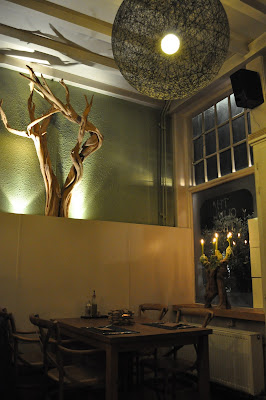 Instead of heading out for beers, we picked up a few bottles from a corner store and went back to the hotel to watch some futbol americano.  It was our last night in Bruges, but we couldn't miss out on cheering for our teams in the playoffs.

The next morning we packed our bags, ate some lunch, and each had a farewell beer at Cambrinus. 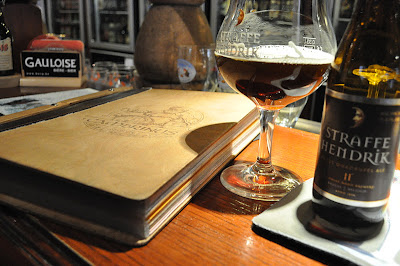 Graham chose one of his favorites, a quadruple from Halve Maan Brewery. 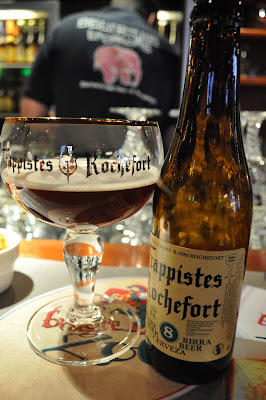 And Meghann had a tasty trappist beer.

To quote the movie "In Bruges" the city is "an effing fairytale".  Ok, so Colin Farrell didn't say "effing" but our moms read the blog (hola, Moms).  Meghann said that it is the most consistently beautiful European city she has visited.  Bruges might not have the "wow factor" that Rome or Paris have, but every inch of it is absolutely lovely.  The entire historic city center is a UNESCO World Heritage site.  And it has all the authentic, charming details you could possibly want - cobblestone streets, canals, bikes, swans, horse-drawn carriages, boats, cozy restaurants warmed by fireplaces. 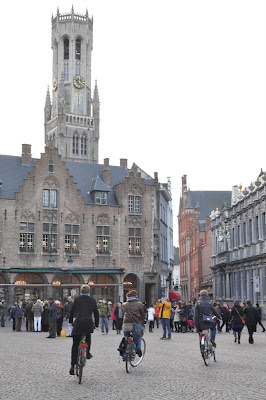 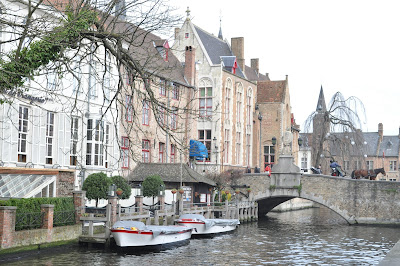 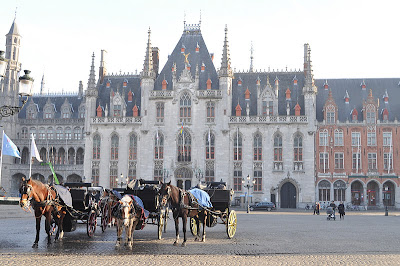 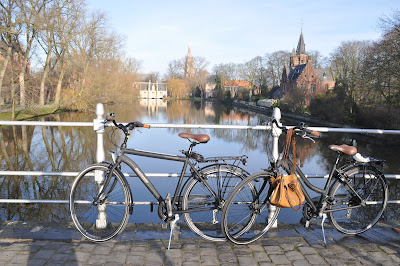 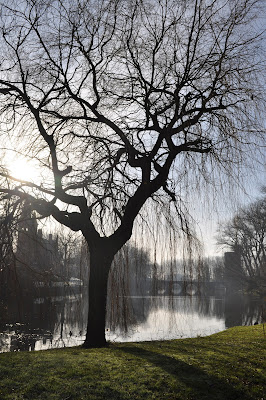 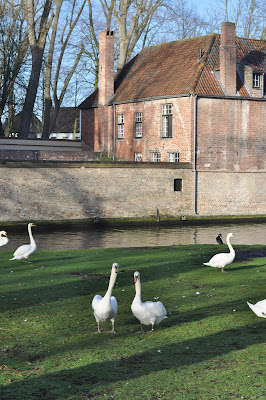