I had been hearing and reading great things about Porto recently, so when we were coming up with ideas for the long weekend, I suggested it. And by phrasing it this way "What about Porto? We could go port tasting!" I knew that Graham would be sold.

He loves port, has for a while. I can remember buying him bottles of 20 year tawny for special occasions when we lived in Texas, way back when he was in flight school, when we were young younger and dating. During our first trip to Portugal, Graham did a little port sampling in Sintra and he bought a bottle in Lisbon. As for me...I have always preferred wine, simple, delicious, unfortified wine. But I've learned that the best way to gain an appreciation for something is to learn about it and try it at its source (worked for Guinness and whiskey in Dublin). 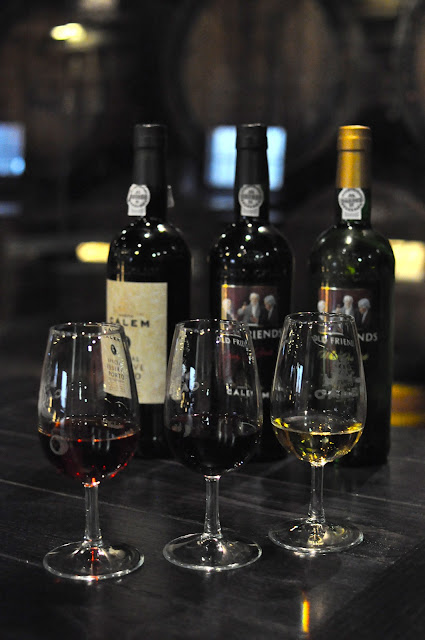 Port tasting in Porto is ridiculously easy to do - simply cross the bridge in Porto to Vila Nova de Gaia and walk along the riverfront, with the old port boats anchored along the side. All of the cellars are lined up, each easily identified by large signs, and hours clearly posted out front. If you have any questions about tours or tastings, the staff at most cellars are very friendly and required to speak at least 2 languages, so English is no problem, but many speak 4 or 5, if you would prefer French, German, or Spanish. (Coming from southern España, where the concept of customer service is a little rough, we were impressed.) 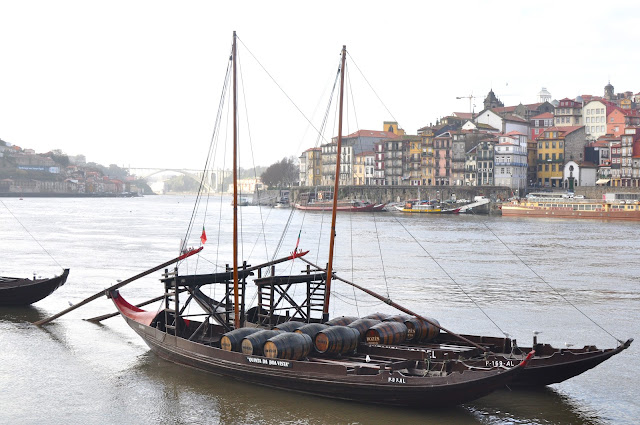 Our first stop was Ferreira, one of the older port producers, and not one that is largely exported to the States (we tried to avoid those that we could get "anywhere"). We did the tour, where we learned about the history of the brand, the cultivation of the grapes (which are grown farther up the river, in the Douro valley), production of port, and the different varieties. Then we tasted! We had opted for the extended sampling, meaning we had 5 to try, instead of the standard 2 or 3. So, we looked like booze hounds serious port drinkers compared to the other people in our group. 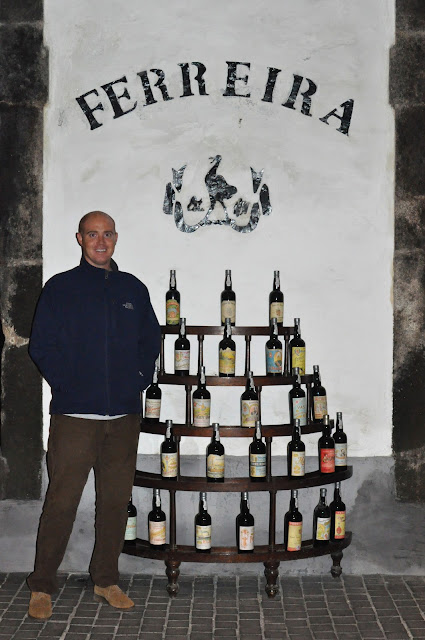 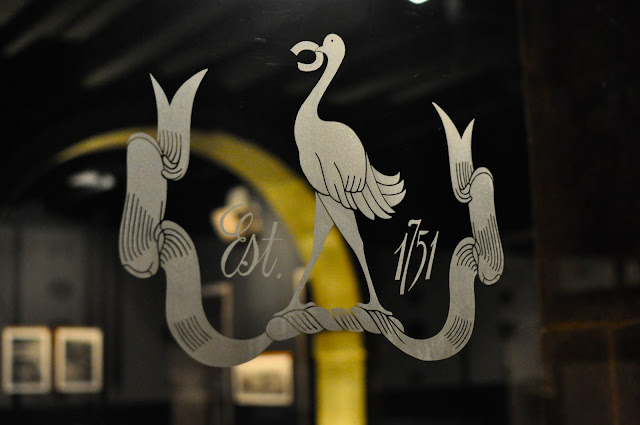 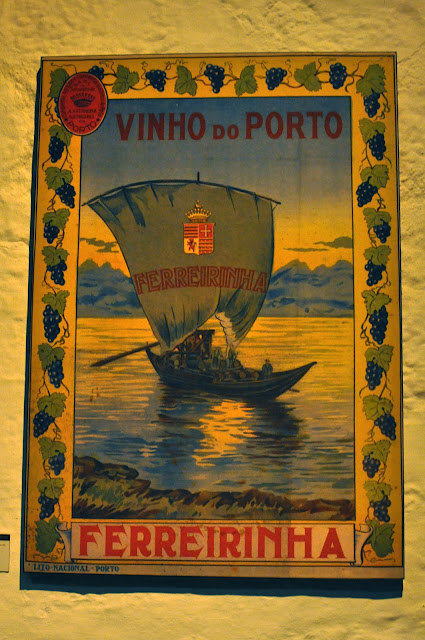 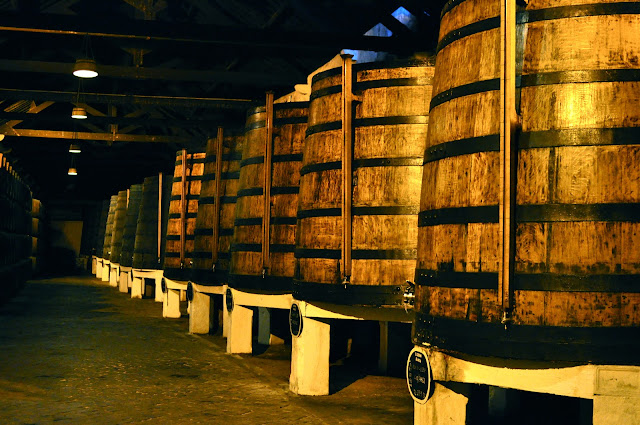 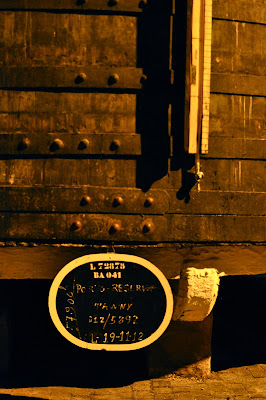 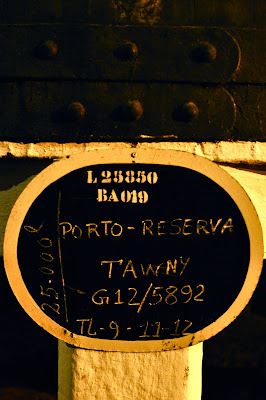 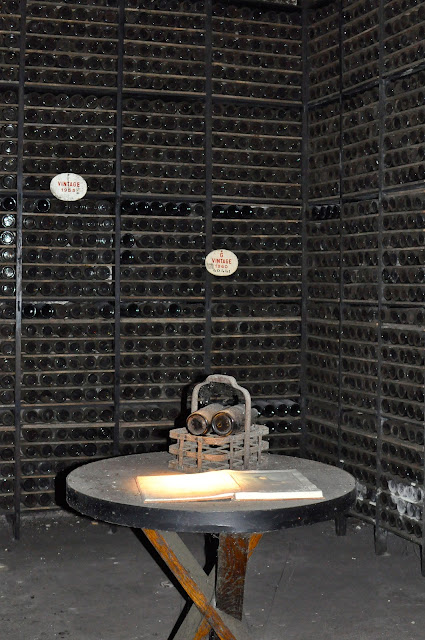 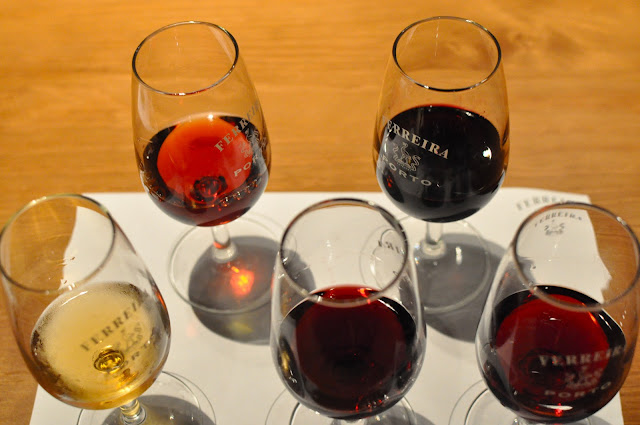 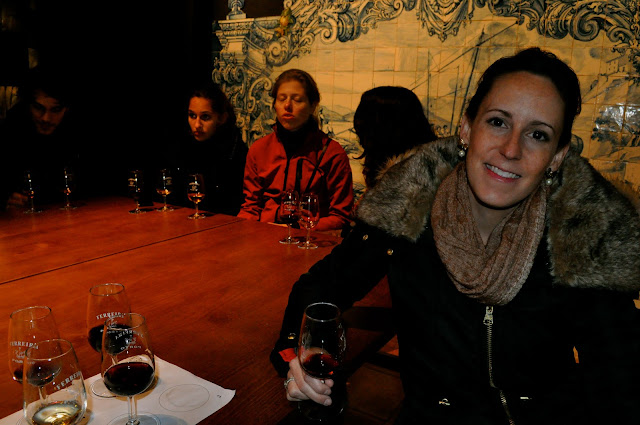 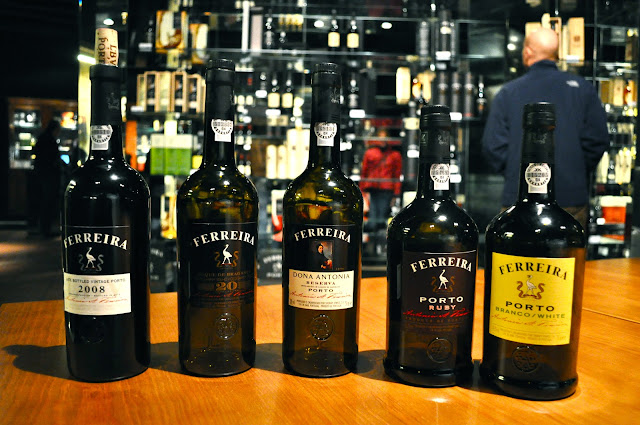 Even though Graham knows his port, he said he learned a few new things. And I learned that I like white port (porto branco) because it reminds me of dry sherry, which is so popular where we live in España. (It also makes me a cheap date, because it is the least expensive of all the varieties.)

Port is a lot like sherry - fortified wines ranging from dry to very sweet, made from grapes grown in a small and specific area, popularized by the English who invested heavily in its production, and confusing to many Americans. So, even if I was thrown off by the ease of tasting and the excellent customer service after living in southern España for a year and a half, the history and the taste seemed familiar.

We did other tastings at Calem, Quinta da Noval, and Sandeman (which also produces sherry here in España). 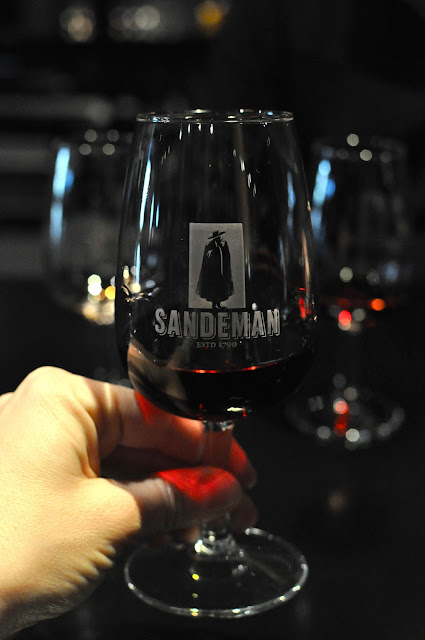 We have always wondered about the cape-wearing Sandeman guy, who looks like some sort of super hero for wine drinkers. Mystery solved - the cellars are cold and the cape is necessary to keep warm, we saw lots of port cellar staff rocking capes with the company logo. 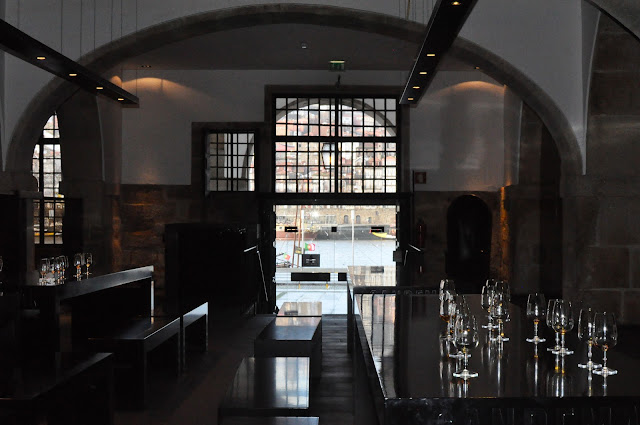 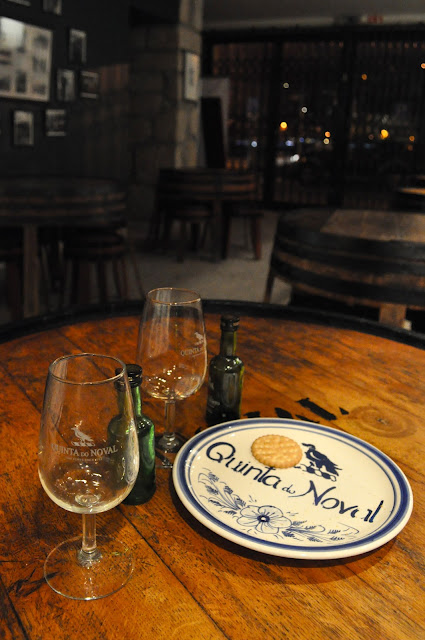 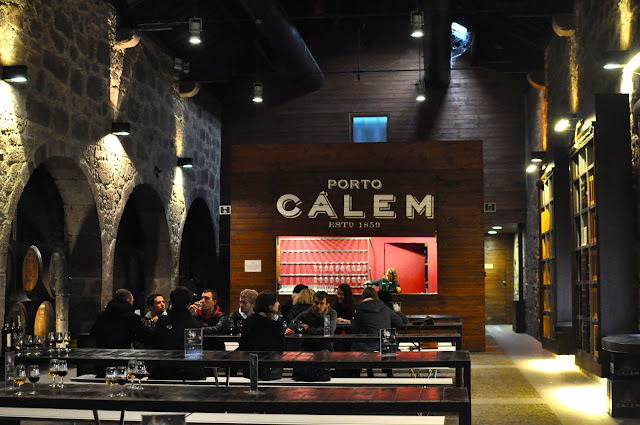 We kept it simple at Calem and did the 3 variety tasting with chocolate. One of the staff was very friendly - he had lived in Madrid for 6 years, danced flamenco, and was familiar with where we live and the sherry producers here. He chatted with us in English for a bit (while switching into German and French as needed to answer questions for other customers) and then offered us a glass of something "special" that he though we might like. 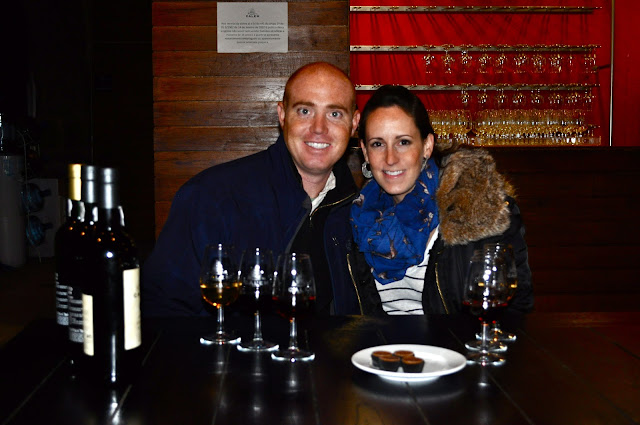 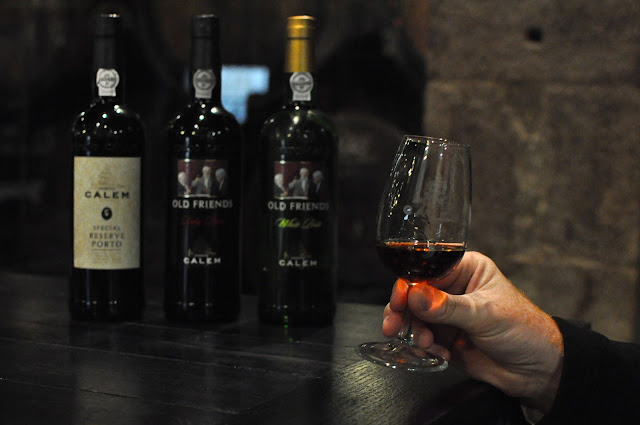 A 1960 Colheita, a single year vintage tawny port - dark amber, complex yet mellow, and oh so tasty, even I loved it. 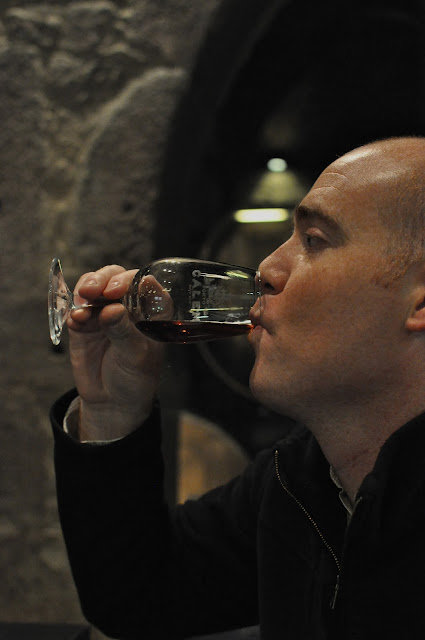 Unfortunately, all that deliciousness does not come cheap, and bringing a bottle home was out of our budget (228€ or about $300). First taste is free, then you have to pay... 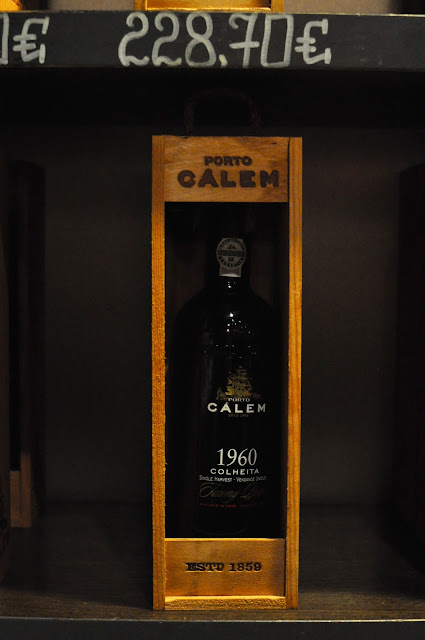 I can't say enough good things about Porto and our experience tasting port in its hometown made the trip even better. Whether you're a port lover like Graham or just learning to enjoy it (me!) doing at least one tour and tasting for a few Euros is completely worth it. And if you find yourself wanting to try more after the first round, you have plenty of options a few footsteps away... 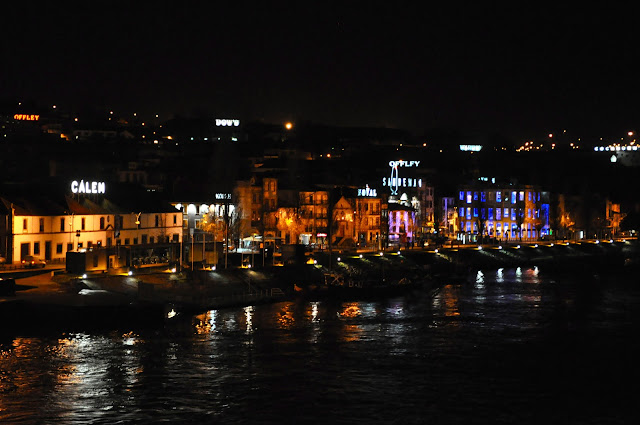